(a) What is reverberation? Write two ways of reducing reverberation. (b) Distinguish between tone and note. (c) With the help of a simple diagram, explain how defects in a metal block can be detected using ultrasound

(a) The persistence of sound in an auditorium as a result of repeated reflections of sound is called reverberation.
(b) A sound of single frequency is called a tone.
The sound which is produced due to a mixture of several frequencies is called a note.
© Ultrasounds can be used to detect cracks and flaws in metal blocks. The cracks or holes inside the metal blocks, which are invisible from outside reduce the strength of the structure. Ultrasonic waves are allowed to pass through the metal block and detectors are used to detect the transmitted waves. If there is even a small defect, the ultrasound gets reflected back indicating the presence of the flaw or defect.
The diagram is as shown : 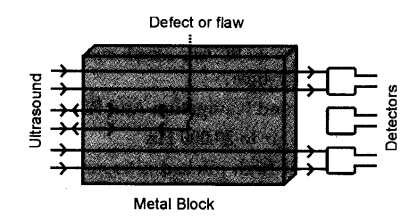