(a) Magnetic field is the region around a magnet in which magnetic material experiences a force because of that magnet. 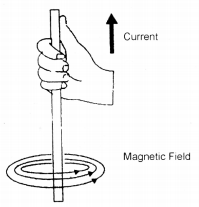