1. Why did Mendel choose garden pea for his experiments? Write two reasons

2.Tall and dwarf characters.
3. A cross of plant (tall or dwarf) shape of seed (round or wrinkled) is considered is monohybrid cross.

Mendel’s Experiment considering only one trait: Mendel took pea plants with different characteristics as tall plant 'and dwarf plant. The first generation of F1 progeny thus formed are all tall. There were no half way characteristics in the first generation. There were no “medium height” plants. Mendel then allowed the F1 progeny plants for self pollination. F2 progency of tall plants are not all tall, some are short. It indicates that both tallness and dwarfness traits were inherited in F1 plants, but only tallness trait was expressed. Two copies of a trait are inherited in each sexually reproducing organism. These two may be identical, or may be different, depending on percentage (%).

Both TT and Tt are tall plants, but only tt is a dwarf plant.

A single copy of “T” is enough to make plant tall while both copies have “t” for the plant may be dwarf. So traits like “T” are called dominant traits, whole “t” are called recessive traits. 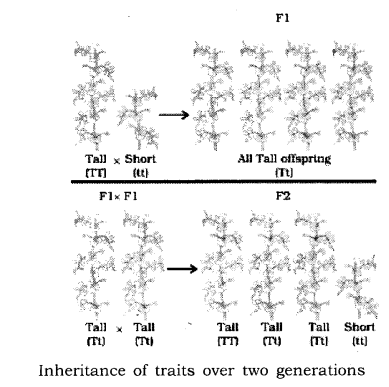