1. What is spore formation?

Spore Formation: Seen in Rhizopus (a fungus). Rhizopus body is made up of thread like structures called hyphae. The erect hyphae bear sporangia inside which reproductive structures called spores are formed. Spores are asexually reproducing bodies having a thick protective wall. They are produced during unfavourable times and help to tide over the unfavourable environmental conditions. When the spores fall on suitable medium, each one forms a new individual. 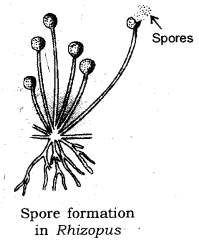