Give an account of structure and life cycle of bacteriophage

(a) Bacteriophages are viruses which attack and destroy bacteria.
(b) They were discovered by Edward Twort (1915).
© A bacteriophage consist of two parts-head and tail.
(d) The head is in the form of bipyramidal hexagonal prism whereas tail is cylindrical.
(e) The head consists of proteinaceous membrane enclosing a core of viral DNA.
The tail has four components : A central core, a protein sheath and a collar that pins at the comer of basal plate. The basal plate bears she long tail fibres. 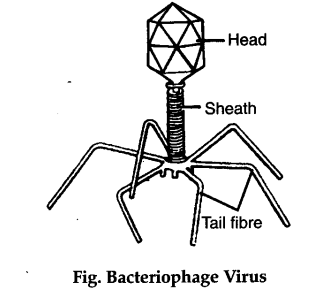 Life Cycle : Depending upon the life cycle, bacteriophages are of two types :
(i) Lytic or Virulent phages: The bacterium undergoes lyses and a large number of newly formed phage particles are liberated. These causes the death of the host cells.
(ii) Lysogenic or temperate phages : (a) These phages do not multiply and do not cause death of the host cells, (b) The DNA of the phage enters the bacterium and get integrated with bacterial genome, © The phage genome in integrated state is called prophage, (d) Prophage made of viral and bacterial genome, replicates as one unit and the daughter genomes are passed on to offsprings, (e) This process is called lysogeny and the bacteria in which this vims occur is called as lysogenic strain. e.g., Lambda phage attacks E. coli.