Anaphase of Mitosis : (a) It begins by division of centromere.
(b) Fibres uniting chromosomes with poles of spindle begin contracting until daughter chromosomes are completely distinct from one another.
© Contraction of fibres pulls the groups of chromosomes further apart to their repetitive poles
(d) There is no increase in diameter of fibres as they contract.
(e) Elastic mechanism is not involved.
(f) Contraction of fibres and separation of two groups of chromosomes is very rapid-
(g) The chromosomes move to their poles through cytoplasm.
(h) They assume characteristic V-, J- or I-shaped configuration, the centromere may be in centre or away from it or may be at terminal end. 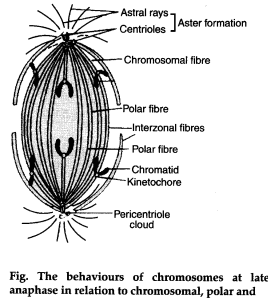