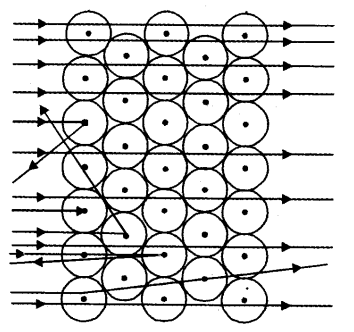 (a) This figure shows scattering of alfa-particles by a gold foil (Rutherford’s experiment).
(b) Observations:
(i) Most of the a-particles passed straight through the gold foil.
(ii) Some of the a-particles were deflected by the foil by small angles.
(iii) One out of every 12000, particles appeared to rebound.
© Conclusions:
(i) Most of the space inside the atom is empty.
(ii) The positive charge of the atom occupies very little space.
(iii) All the positive charge and mass of the atom is present in a very small volume within the atom.
(d) Rutherford’s Model of atom:
(i) There is positively charged centre in an atom called the nucleus which contains the whole mass of the atom.
(ii) The electrons revolve around the nucleus.
(iii) The size of the nucleus is very small as compared to the size of the atom.